Menu
You are here: Travel /

Review of Royal Caribbean’s Enchantment of the Seas

REVIEW OF ROYAL CARIBBEAN’S ENCHANTMENT OF THE SEAS Some people think that picking a cruise to take is easy—just look up the dates you want to travel, discover a decent deal, and purchase your ticket. Unfortunately, the procedure isn’t quite that simple (unless you have absolutely no specific desires and just want to get out on the open seas).

You can’t blame me for looking into every cruise line and ship that was available since I had never taken a cruise before. After initially feeling a little overwhelmed, I chose the Royal Caribbean Enchantment of the Seas.

After the brief but invigorating three-day holiday, I have nothing but positive things to say about my time on the ship. Even while I would love to give you a comprehensive account of my journey, I’ll limit myself to the essential points so you can determine whether this ship is the best choice for your upcoming excursion.

State of the Ship 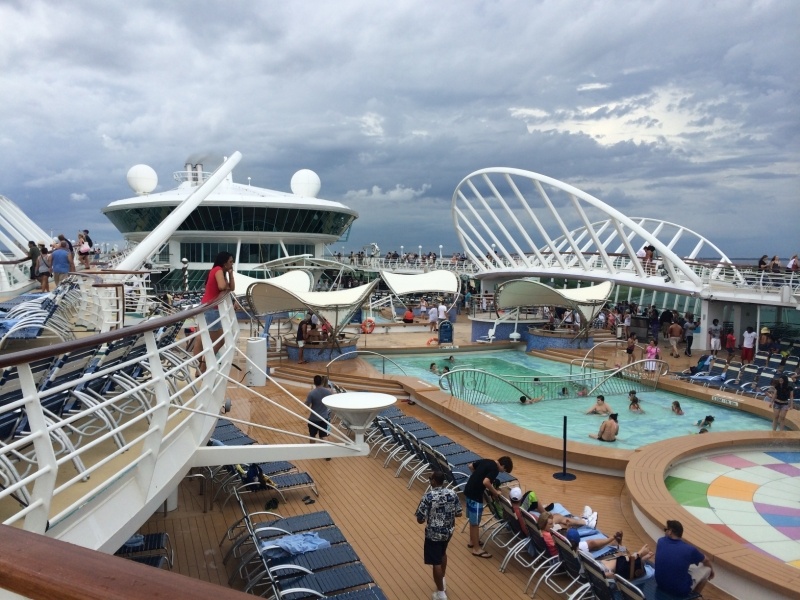 Although there are no water slides on The Enchantment of the Seas (sorry kids), it is nonetheless a gorgeous ship inside. The Centrum, an entertainment hub that extends all the way to deck 10, may be found if you head to deck 4 of the ship. This was one of my favorite locations to spend time because of how welcoming the setting was, how much fun the activities were, and how well-kept everything was.

Although several reviewers have criticized the ship’s wear and tear, I was unable to see any proof of it. The Royal Caribbean employees, in my opinion, did a fantastic job of keeping everything clean and responding to repair requests as they came in.

The deck corridors were the cabins were the only places that I would describe as plain, but I wasn’t expecting much ornamentation there. Since you won’t be in your stateroom for very long, I wouldn’t allow a few uninteresting walls stop you from boarding this cruise.

Dining Experience with My Fair Lady 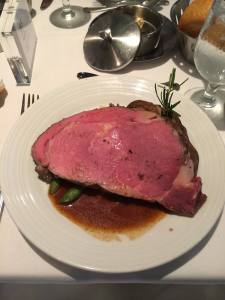 I can’t express how wonderful the main dining room is, My Fair Lady. You have the choice to specify whether you would prefer flexibility or a set dinnertime each night when you submit your cruise paperwork (called My Time Dining). Since we wanted to know when all the important events will occur, we used My Time Dining.

We chose to eat at 6 p.m. after considering the schedule in order to be in time for the shows that started at just after 7. The My Fair Lady desk on deck 5 was accommodating when we made a reservation there.

At My Fair Lady, we attended three dinners—two casual and one formal (which took place the second night). I was pleased that we were able to reserve the same table each night, which meant that we had the same server and waitress. Our primary server, Nilesh, was excellent in responding to our inquiries and accurately taking our orders. He earns extra points for not complaining when I ordered two desserts, Nilesh!

Jose, our helper, made sure we had bread and drinks every night. He was a really easy person to talk to and always gave us a warm welcome. He informed us that he had spent seven months on the ship and was preparing to return home soon. Talk about commitment!

The cuisine was also excellent. The first night I ate linguini, the second night steak tenderloin, and the third night lasagna. The portions of my dish were always just correct, and they were always brought at the ideal temperature. Prior to each entree, I also had an appetizer, and I finished it all off with one or more desserts. Already missing My Fair Lady’s meals!

Dining at Windjammer and Park Cafe

Perhaps the most excited crew members on the ship were those working outside the Windjammer. In the morning, they would sing and always say hello and grin to everyone. They did a good job of getting us pumped up for the day.

Despite having a wonderful crew, I wasn’t as impressed with the Windjammer meal. Only a few occasions, and only out of convenience, did we eat there. Don’t get me wrong, there are many food alternatives there, but I believe there are places where the food is much, much better. To avoid the Windjammer, we chose to have breakfast delivered to our stateroom one morning.

The Park Caf is somewhat concealed in the Solarium (deck 9 towards the back of the ship), but it is undoubtedly an excellent place to stop for a snack, especially when you first board the ship. Although there are less options here, you may still find a variety of salads, sandwiches, soups, and desserts. Personally, I thought the cuisine at Park Caf was delicious and filling—certainly superior to that at the Windjammer (it also gets bonus points for not being as busy). 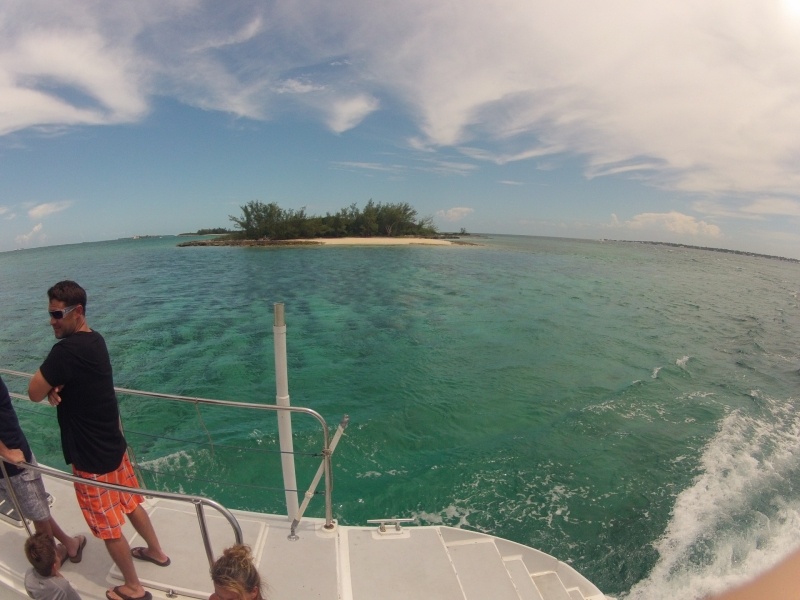 No of your age, Royal Caribbean has a large selection of shore excursions to choose from. The Enchantment of the Seas makes its first port of call in Nassau, Bahamas, and provides excursions including snorkeling, trips to Atlantis, and encounters with dolphins.

The Seahorse Snorkeling Excursion, which runs about $50 per person, is the one we decided to take. The catamaran we boarded was very comfortable and provided space for the 50 passengers we had. The helpful staff made sure that everyone got the snorkeling gear they required.

We saw a number of magnificent residences on the way out to the reef region. We had time to relax on the boat and take in the breathtaking scenery while we traveled for about an hour to the snorkeling location.

We put on our gear and dove into the ocean when we eventually arrived at our destination. I was astounded by how many fish there were! I never in my life saw so many different kinds of fish in one place. I strongly disagree with several reviews that claimed the snorkeling space was too tiny. My goggles leaked, which is the only complaint I have about the entire expedition, but it didn’t stop me from enjoying myself.

Before having to board the catamaran once more and return to the dock, we had an hour to spend in the water. The crew provided rum and punch for all of the adults to sip on the way back. While we were docking, we listened to some enjoyable music, and the crew and a few cruisers even performed the Cupid Shuffle on the front of the ship! I had a lot of fun!

Royal Caribbean’s own island in the Bahamas is CocoCay. 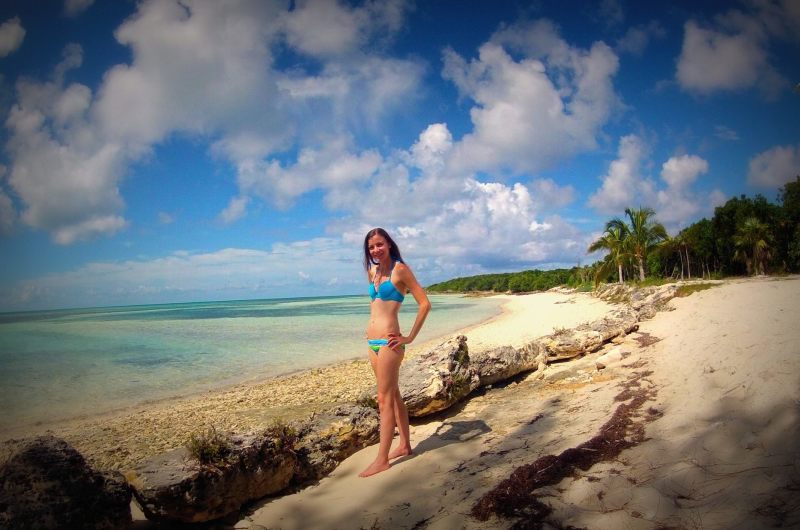 I want to put an end to all the negative comments about CocoCay since this location is fantastic!
To make the most of your stay on the island, follow these recommendations:

Take part in one of the earlier bids Around 9:30 a.m., when we decided to depart, was the ideal time. Stride all the way to the island’s back. The majority of folks make a mistake here! When the tender drops you down at the front of the island, you’ll note that there are many beach chairs there. Don’t stop there! Those chairs quickly fill up and give you a cramped feeling. As an alternative, proceed down the trail until you reach Barefoot Beach (past the giant slide and water slides). There are numerous beach chairs there, but very few people use them. You can continue walking all the way to the island’s back if you choose; this is where we ultimately went snorkeling on our own. While we were out there, we even saw a sting ray! It was totally worth the distance. Around 1:00 p.m., go to the BBQ. You can only imagine how hectic it becomes after noon rolls around because lunch is served on the island from 12 to 2 p.m. The dish amazed me with how good it was! In addition to my cheeseburger, the rice with black beans and the extraordinarily soft chocolate chip cookies were both fantastic. Around 3 or 3:30, depart the island. I advise boarding one of the earlier tenders because the last one leaves Coco Cay at 4:30 p.m. After a day in the sun, we were really exhausted, so before our 6 o’clock supper, we showered up and watched some football on ESPN (yep, there was ESPN on the ship). Entertainment 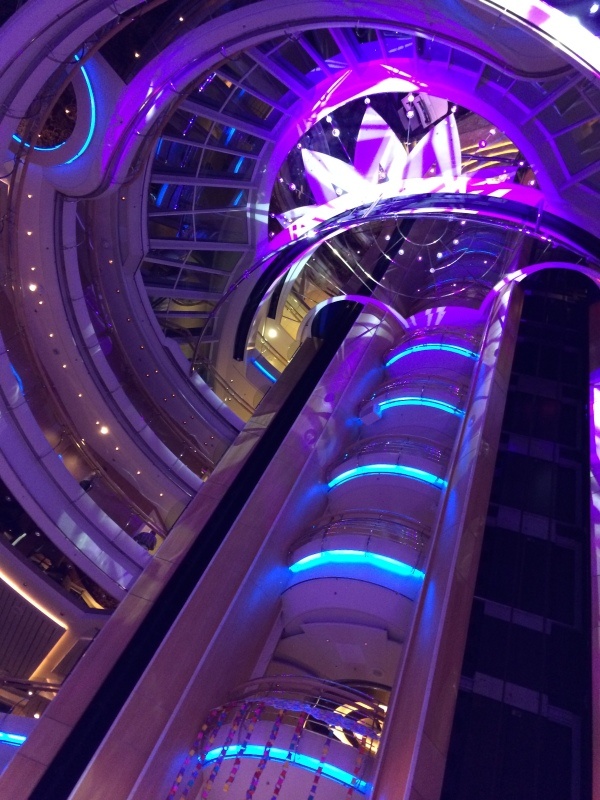 Attending every single event on the Enchantment of the Seas was a blast for me! Our cruise director, Marc, and our activities manager, Enzo, both had a lot of energy and did a fantastic job of keeping us laughing and enjoying the entire night.

Several of the performances we saw were:

Stage to Screen (a collection of Broadway hits performed by the singers and dancers on the ship) Comedy Juggling Comedy Act (by Adam Kario) Additionally, a ton of entertaining game programs were broadcast:

Complete that lyric Oh, we’re almost there, ohhhh . Bunny Chubby (If you have no idea what it is, search for it on YouTube; you won’t be sorry.) Dance it if you know it! (YMCA, Gangnam Style, and all those other fantastic tunes, including Cupid Shuffle) Quest (I have no words for this one other than be prepared to do some crazy things) Passion and Matrimony (The Newlywed Game) Excellent Ship for Everyone!

I can honestly say that I enjoyed everything I did on the cruise, even though the three-day cruise I took didn’t give me enough time to try everything (there was also a rock climbing wall and bungee trampolines). Being on a ship for the first time made me anxious, but once I realized how much there was to do there, my anxiety subsided.

Anybody seeking for a quick trip or who is new to sailing should definitely choose this ship!
2

Bathtubs: All the Information You Need

Bathtubs: All the Information You Need